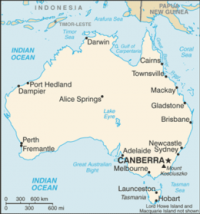 On 10 June 1960 a Fokker Friendship passenger aircraft operated by Trans Australia Airlines (TAA) was on approach at night to land at Mackay, Queensland, Australia when it crashed into the sea. All 29 people on board Trans Australia Airlines Flight 538 were killed. It was TAA's first accident to cause passenger-fatalities in the 14 years since the airline was founded. It remains Australia’s deadliest civil aviation accident.[2]