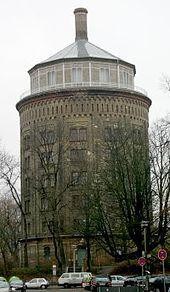 The Wasserturm Prenzlauer Berg is Berlin's oldest water tower, completed in 1877 and in use until 1952. The structure was designed by Henry Gill and built by the English Waterworks Company. It is situated between Knaackstraße and Belforter Straße in Kollwitzkiez, in the Prenzlauer Berg locality of Berlin (part of Pankow district) and worked on the principle of using piped water to supply the rapidly growing population of workers.