There has been some speculation that the ruins may be from Mayans that moved into North America but this has not been documented. 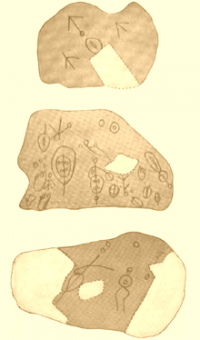 Track Rock is located in the Track Rock Gap Archaeological Area (9Un367) in the Brasstown Ranger District of the Chattahoochee National Forest in Georgia. This 52-acre (210,000 m) area contains preserved petroglyphs of ancient Native American origin that resemble animal and bird tracks, crosses, circles and human footprints. Track Rock is explained by the Georgia Historical Marker placed there in 1988: