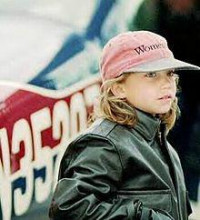 Jessica Whitney Dubroff (May 5, 1988 – April 11, 1996) was a seven-year-old pilot trainee who died attempting to become the youngest person to fly an airplane across the United States. Twenty-four hours into her quest, her Cessna 177B Cardinal single engine propeller aircraft, flown by her flight instructor, crashed after takeoff from Cheyenne Regional Airport in Cheyenne, Wyoming, killing all on board: Dubroff, her father, and her flight instructor.