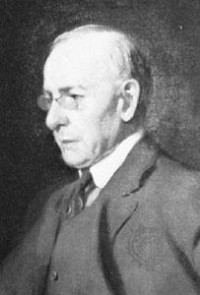 Louis Henry Sullivan (September 3, 1856 – April 14, 1924) was an American architect, and has been called the "father of skyscrapers"[2] and "father of modernism".[3] He is considered by many as the creator of the modern skyscraper, was an influential architect and critic of the Chicago School, was a mentor to Frank Lloyd Wright, and an inspiration to the Chicago group of architects who have come to be known as the Prairie School. Along with Henry Hobson Richardson and Frank Lloyd Wright, Sullivan is one of "the recognized trinity of American architecture".[4] He posthumously received the AIA Gold Medal in 1944.