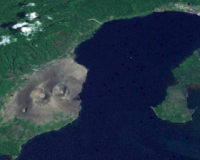 Vulcan is a pumice cone in Papua New Guinea. It is a sub-vent of the Rabaul caldera and lies on the western rim of the larger feature. Its most recent eruption was in 1994, when in conjunction with another vent, Tavurvur, the eruptions of Vulcan forced the temporary abandonment of the city of Rabaul and the relocation of the local administrative centres of East New Britain Province, to a new capital, Kokopo. Today, the slopes of Vulcan are now forested, as a result of dormancy since 1994.