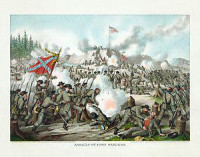 The Battle of Fort Sanders was the decisive engagement of the Knoxville Campaign of the American Civil War, fought in Knoxville, Tennessee, on November 29, 1863. Assaults by Confederate Lt. Gen. James Longstreet failed to break through the defensive lines of Union Maj. Gen. Ambrose Burnside, resulting in lopsided casualties, and the Siege of Knoxville entered its final days.