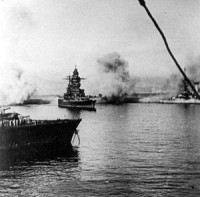 The Attack on Mers-el-Kébir, part of Operation Catapult and also known as the Battle of Mers-el-Kébir, was a British Navy bombardment of the French Navy at its base at Mers-el-Kébir on the coast of what was then French Algeria on 3 July 1940. A British naval task force attacked the French fleet, which was at anchor and not expecting an assault from the United Kingdom, France's former ally. The attack resulted in the deaths of 1,297 French servicemen, the sinking of a battleship and the damaging of five other ships. France and the United Kingdom were not at war but France had surrendered to Germany, and the UK feared the French fleet would end up as a part of the German Navy, a fate that would greatly increase the Kriegsmarine's size and combat ability. Although French Admiral François Darlan had assured Winston Churchill the fleet would not fall into German possession, the British acted upon the assumption that Darlan's promises were insufficient guarantees.[3] The attack remains controversial to this day, and created much rancour between the United Kingdom and France, but it also demonstrated to the world and to the United States in particular, Britain's commitment to continue the war with Germany at all costs and without allies if need be.[4]