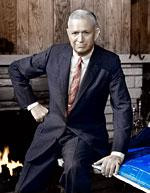 John Willard Marriott (September 17, 1900 – August 13, 1985) was an American entrepreneur and businessman. He was the founder of the Marriott Corporation (which became Marriott International in 1993), the parent company of one of the world's largest hospitality, hotel chains, and food services companies. The Marriott company rose from a small root beer stand in Washington D.C. in 1927 to a chain of family restaurants by 1932, to its first motel in 1957. By the time he died, the Marriott company operated 1,400 restaurants and 143 hotels and resorts worldwide, including two theme parks, earned USD $4.5 billion in revenue annually with 154,600 employees. The company's interests even extended to a line of cruise ships and theme parks.