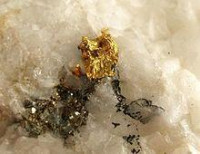 The gold mine was named on June 15, 1867, with the name commemorating the completion of the laying of the second transatlantic cable. The mine's founders were Alexander Aiken, John B. Pearson and Jonas Stough. They were camped on Flint Creek and their horses had drifted off. In tracking them to this location, the men were led to the discovery of the mine. Machinery for the first mill was imported from Swansea, Wales, and moved by wagon team from Corinne, Utah, the nearest railroad terminal.