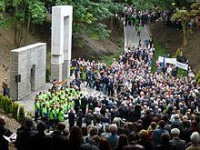 In July 1941, 25 Polish academics from the city of Lwów (since 1945 Lviv, Ukraine) were killed by Nazi German occupation forces along with their families and guests. By targeting prominent citizens and intellectuals for elimination, the Nazis hoped to prevent anti-Nazi activity and to weaken the resolve of the Polish resistance movement.