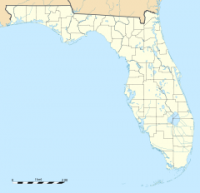 The SS Tarpon (originally known as the Naugatuck) was a ship which sank in 1937 near Panama City, Florida, United States. The shipwreck is located 7.8 nautical miles (14.4 km) off the shore of Panama City. It became the sixth Florida Underwater Archaeological Preserve when it was dedicated in 1997. In May 2001, it was added to the U.S. National Register of Historic Places.