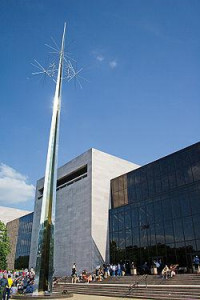 The National Air and Space Museum (NASM) of the Smithsonian Institution holds the largest collection of historic aircraft and spacecraft in the world in 161,145 square feet (14,970.9 m) of exhibition floor space.[5] It was established in 1946, as the National Air Museum and opened its main building in 1976. Located in Washington, D.C., United States, it is a center for research into the history and science of aviation and spaceflight, as well as planetary science and terrestrial geology and geophysics.[5] Almost all space and aircraft on display are originals or backups to the originals. It operates an annex, the Steven F. Udvar-Hazy Center, at Dulles International Airport, which opened in 2003 and itself encompasses 760,000 square feet (71,000 m2). The museum currently conducts restoration of its collection at the Paul E. Garber Preservation, Restoration, and Storage Facility in Suitland, Maryland while steadily moving such restoration and archival activities into its Udvar-Hazy annex facilities as of 2014.