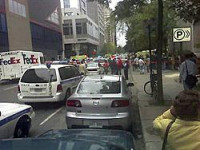 The Dawson College shooting occurred on September 13, 2006 at Dawson College, a CEGEP located in downtown Montreal, Quebec, Canada. The perpetrator, Kimveer Gill, began shooting outside the de Maisonneuve Boulevard entrance to the school, and moved towards the atrium by the cafeteria on the main floor.[2] One victim died at the scene, while another 19 were injured, eight of whom were listed in critical condition, with six requiring surgery.[3][4][5] The shooter later committed suicide by shooting himself in the head, after being shot in the arm by a police officer.[6]