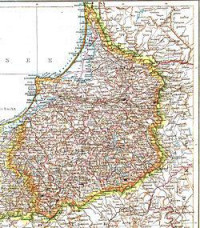 Nemmersdorf in East Prussia (today's Mayakovskoye, Kaliningrad Oblast) was one of the first pre-war ethnic German villages to fall to the advancing Red Army in World War II. On October 21, 1944[2] it was the scene of a massacre perpetrated by Soviet soldiers against German civilians and French and Belgian noncombatants. Determining the facts has aroused controversy, with fatalities estimated at 64 to 71. Records of the Soviet Army have become newly available to scholars for research since the fall of the Soviet Union, resulting in new works being published on this topic.