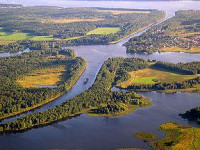 The Moscow Canal (Russian: Кана́л и́мени Москвы́), named the Moscow-Volga Canal until the year 1947, is a canal that connects the Moskva River with the Volga River. It is located in Moscow itself and in the Moscow Oblast. The canal connects to the Moskva River 191 kilometers from its estuary in Tushino (an area in the north-west of Moscow), and to the Volga River in the town of Dubna, just upstream of the dam of the Ivankovo Reservoir. Length of the canal is 128 km.