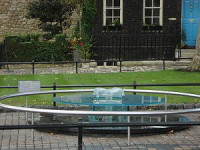 Tower Green is a space within the Tower of London where two English Queens consort and five other British nobles were executed by beheading. The Tower Green is located on a space south of the Chapel Royal of St. Peter ad Vincula. Beheading in the privacy of the Tower Green was considered a privilege of rank; the executed were spared insults from jeering crowds, and the monarch was spared bad publicity. Other prisoners in the tower were executed in public on Tower Hill, just outside the fortress, or at Tyburn on the other side of the city. In the middle of the green is a small square plot paved with granite, which shows the site on which stood the scaffold on which private executions took place. The granite paving was specially created by order of Queen Victoria.[2]