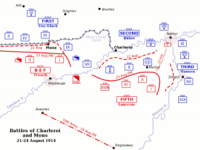 The Battle of Charleroi (French: Bataille de Charleroi), or the Battle of the Sambre, was fought on 21 August 1914, by the French Fifth Army and the German 2nd and 3rd armies, during the Battle of the Frontiers. The French were planning an attack across the Sambre River, when the Germans attacked first, forced back the French from the river and nearly cut off the French retreat by crossing the Meuse around Dinant and getting behind the French right flank. The French were saved by a counter-attack at Dinant and the re-direction of the 3rd Army to the north-west in support of the 2nd Army, rather than south-west.