Hotel Alexandria by John B. Parkinson 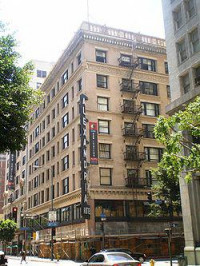 The Hotel Alexandria is an historic building constructed as a luxury hotel at the beginning of the 20th century in what was then the heart of downtown Los Angeles. As the business center of the city moved gradually westward, the hotel decayed and gradually devolved into a single room occupancy (SRO) hotel housing long-term, low income residents and gained a reputation for crime and being unsafe. As the area was revitalized in the first decade of the 21st century, the building found itself at the heart of this and has recently been remodeled as apartments.