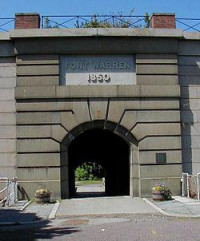 Fort Warren is a historic fort on the 28-acre (110,000 m) Georges Island at the entrance to Boston Harbor. The fort is pentagonal star fort, made with stone and granite, and was constructed from 1833–1861, completed shortly after the beginning of the American Civil War. Fort Warren defended the harbor in Boston, Massachusetts, from 1861 through the end of WWII, and during the Civil War served as a prison for Confederate officers and government officials. The fort remained active through the Spanish–American War and World War I, and was re-activated during World War II. It was permanently decommissioned in 1947, and is now a tourist site. It was designated a National Historic Landmark in 1970 as a masterpiece of coastal engineering of the pre-Civil War period, and for its role in the Civil War. It was named for Revolutionary war hero Dr. Joseph Warren, who sent Paul Revere on his famous ride, and was later killed at the Battle of Bunker Hill.