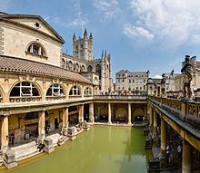 The Bath curse tablets are a collection of about 130 Roman era curse tablets (or defixiones in Latin) discovered in 1979/1980 in the English city of Bath. The tablets invoke the intercession of the goddess Sulis Minerva in the return of stolen goods and to curse the perpetrators of the thefts. Inscribed mostly in British Latin, they have been used to attest to the everyday spoken vernacular of the Romano-British population of the second to fourth centuries A.D.