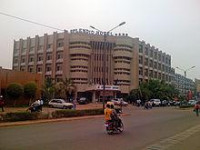 On 15 January 2016, gunmen armed with heavy weapons attacked the Cappuccino restaurant and the Splendid Hotel in the heart of Ouagadougou, the capital of Burkina Faso. The number of fatalities reached 29,[8][9] while at least 56 were wounded; a total of 176 hostages were released[2][10] after a government counter-attack into the next morning as the siege ended. Three perpetrators were also killed.[3] The nearby YIBI hotel was then under siege, where another attacker was killed. Notably, former Swiss MPs Jean-Noël Rey and Georgie Lamon were killed. The attack was claimed by Al-Qaeda in the Islamic Maghreb (AQIM).