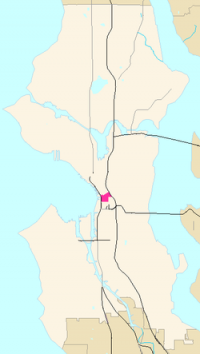 Pioneer Square is a neighborhood in the southwest corner of Downtown Seattle, Washington, USA. It was once the heart of the city: Seattle's founders settled there in 1852, following a brief six-month settlement at Alki Point on the far side of Elliott Bay. The early structures in the neighborhood were mostly wooden, and nearly all burned in the Great Seattle Fire of 1889. By the end of 1890, dozens of brick and stone buildings had been erected in their stead; to this day, the architectural character of the neighborhood derives from these late 19th century buildings, mostly examples of Richardsonian Romanesque.