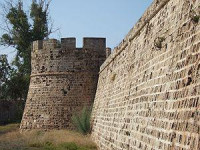 Othello Castle (Greek: Κάστρο της Oθέλλου, Turkish: Othello Kulesi), also known as Othello's Tower, is a castle in Famagusta, Cyprus. It was built by the Lusignans in the 14th century, and was later modified by the Venetians. The castle was named after a Venetian governor in 1506. Shakespeare's play Othello which is believed to be written in 1603 might have taken its name from this castle.