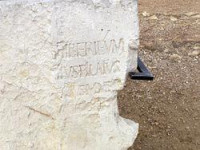 The Pilate stone is a damaged block (82 cm x 65 cm) of carved limestone with a partially intact inscription attributed to, and mentioning, Pontius Pilate, a prefect of the Roman province of Judaea from AD 26–36. It was discovered at the archaeological site of Caesarea Maritima in 1961. The artifact is particularly significant because it is an archaeological find, of an authentic 1st-century Roman inscription mentioning the name "Pontius Pilatus". It is contemporary to Pilate's lifetime, and accords with what is known of his reported career.[3] In effect, the writing constitutes the earliest surviving record and only contemporaneous evidence for the historical existence of this person; otherwise known only from the New Testament and brief mentions in retrospective Roman histories, which have themselves survived only in still-later copies.