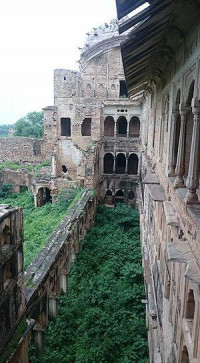 Sabalgarh Fort (Hindi: सबलगढ़ क़िला Sabalgarh Qila) is a 16-17th-century hill fort near Sabalgarh, Madhya Pradesh, central India. This fort is situated on a large rock in the northeastern part of Sabalgarh, which may have also contributed to the city's name. The foundation of the Sabalgarh fort was laid by a Gurjar King, Sabala Singh, with the surrounding town also named Sabalgarh. Presently, the fortress is in ruins and is infamous for stories of hauntings and ghosts. The fort consists of a defensive structure and one main palaces and many other buildings. The fort has been controlled by a number of different rulers in its history.