She lived here with Al Jolson. 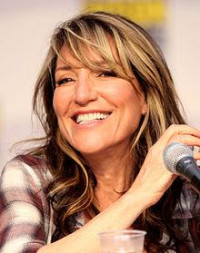 Catherine Louise "Katey" Sagal (born January 19, 1954) is an American actress and singer-songwriter. She first achieved widespread fame as Peggy Bundy on the long-running Fox comedy series Married... with Children, for which she was nominated for four Golden Globe Awards for Best Actress in a Comedy Television Series and two American Comedy Awards during the show's run.