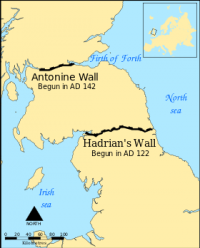 The Antonine Wall, known to the Romans as Vallum Antonini, was a turf fortification on stone foundations, built by the Romans across what is now the Central Belt of Scotland, between the Firth of Forth and the Firth of Clyde. Representing the northernmost frontier barrier of the Roman Empire, it spanned approximately 63 kilometres (39 miles) and was about 3 metres (10 feet) high and 5 metres (16 feet) wide. Lidar scans have been carried out to establish the length of the wall and the Roman distance units used. Security was bolstered by a deep ditch on the northern side. It is thought that there was a wooden palisade on top of the turf. The barrier was the second of two "great walls" created by the Romans in what the English once called Northern Britain. Its ruins are less evident than the better-known Hadrian's Wall to the south, primarily because the turf and wood wall has largely weathered away, unlike its stone-built southern predecessor.