Churches of Peace in Jawor and Świdnica 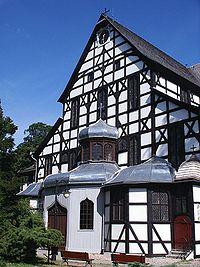 The Churches of Peace (Polish: Kościoły Pokoju, German: Friedenskirchen) in Jawor (German: Jauer) and Świdnica (German: Schweidnitz) in Silesia were named after the Peace of Westphalia of 1648 which permitted the Lutherans in the Roman Catholic parts of Silesia to build three Evangelical churches from wood, loam and straw outside the city walls, without steeples and church bells. The construction time was limited to one year. Since 2001, the two remaining churches are listed as UNESCO World Heritage Sites.