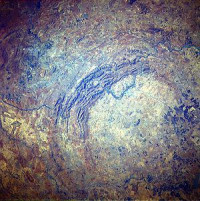 Vredefort crater is the largest verified impact crater to have existed on Earth, more than 300 km across.[2] It was located in the present-day Free State Province of South Africa and named after the town of Vredefort, which is situated near its centre. While the crater itself has long since eroded away, remaining geological structures at its centre are known as the Vredefort Dome or Vredefort impact structure. In 2005, the Vredefort Dome was added to the list of UNESCO World Heritage Sites for its geologic interest.