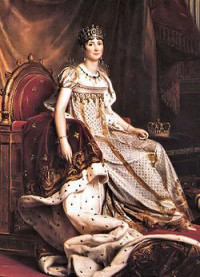 Joséphine de Beauharnais (pronounced: [ʒo.ze.fin də‿bo.aʁ.nɛ]; née Tascher de la Pagerie; 23 June 1763 – 29 May 1814) was the first wife of Napoléon Bonaparte, and thus the first Empress of the French. Her first husband Alexandre de Beauharnais was guillotined during the Reign of Terror, and she was imprisoned in the Carmes prison until her release five days after Alexandre's execution.