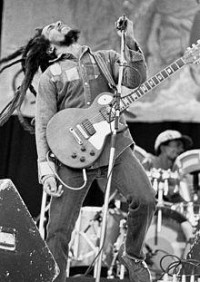 Bob Marley performing in concert, circa 1980.

Nesta Robert Marley, OM (6 February 1945 – 11 May 1981), commonly known as Bob Marley, was a Jamaican singer-songwriter and musician. He was the rhythm guitarist and lead singer for the ska, rocksteady and reggae bands The Wailers (1963-1974) and Bob Marley & The Wailers (1974–1981). Marley remains the most widely known and revered performer of reggae music, and is credited with helping spread both Jamaican music and the Rastafari movement to a worldwide audience.