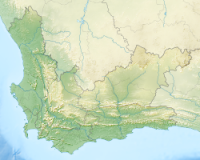 The SS Wafra oil spill occurred on 27 February 1971, when SS Wafra, an oil tanker, ran around while under tow near Cape Agulhas, South Africa. Approximately 200,000 barrels of crude oil were leaked into the ocean.[5] The larger part of the ship was refloated, towed out to sea, and then sunk by the South African Air Force to prevent further oil contamination of the coastline.