The tomb has been moved to the Israel Museum but the place where it was found is here.  It took 35 years for Netzer to identify the exact location, but on May 7, 2007, an Israeli team of archaeologists of Hebrew University led by Netzer, announced they had discovered the tomb.[62][63][64][65] The site is located at the exact location given by Josephus, atop of tunnels and water pools, at a flattened desert site, halfway up the hill to Herodium, 12 kilometers (7.5 mi) south of Jerusalem.[66] The tomb contained a broken sarcophagus but no remains of a body. 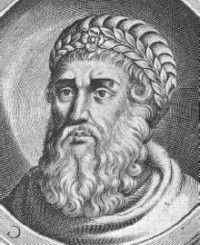 Herod (Hebrew: הוֹרְדוֹס‎, Hordos, Greek: Ἡρῴδης, Hērōdēs), (73/74 BCE – 4 BCE),[2][3][4][5] also known as Herod the Great and Herod I, was a Roman client king of Judea.[6][7][8] He has been described as "a madman who murdered his own family and a great many rabbis",[9] "the evil genius of the Judean nation",[10] "prepared to commit any crime in order to gratify his unbounded ambition"[11] and "the greatest builder in Jewish history".[9] He is known for his colossal building projects throughout Judea, including his expansion of the Second Temple in Jerusalem (Herod's Temple), the construction of the port at Caesarea Maritima, the fortress at Masada and Herodium. Vital details of his life are recorded in the works of the 1st century CE Roman–Jewish historian Josephus.