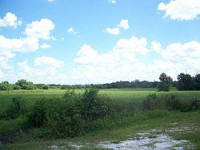 The Battle of Lake Okeechobee was one of the major battles of the Second Seminole War. It was fought between 800 troops of the 1st, 4th, and 6th Infantry Regiments and 132 Missouri Volunteers (under the command of Colonel Zachary Taylor), and between 380 and 480 Seminoles led by Billy Bowlegs, Abiaca, and Alligator on 25 December 1837. The Seminole warriors were resisting forced relocation to a reservation out west. Though both the Seminoles and Taylor's troops emerged from the battle claiming victory, Taylor was promoted to the rank of Brigadier General as a result, and his nickname of "Old Rough and Ready" came mostly due to this battle.